Your News, Your Views 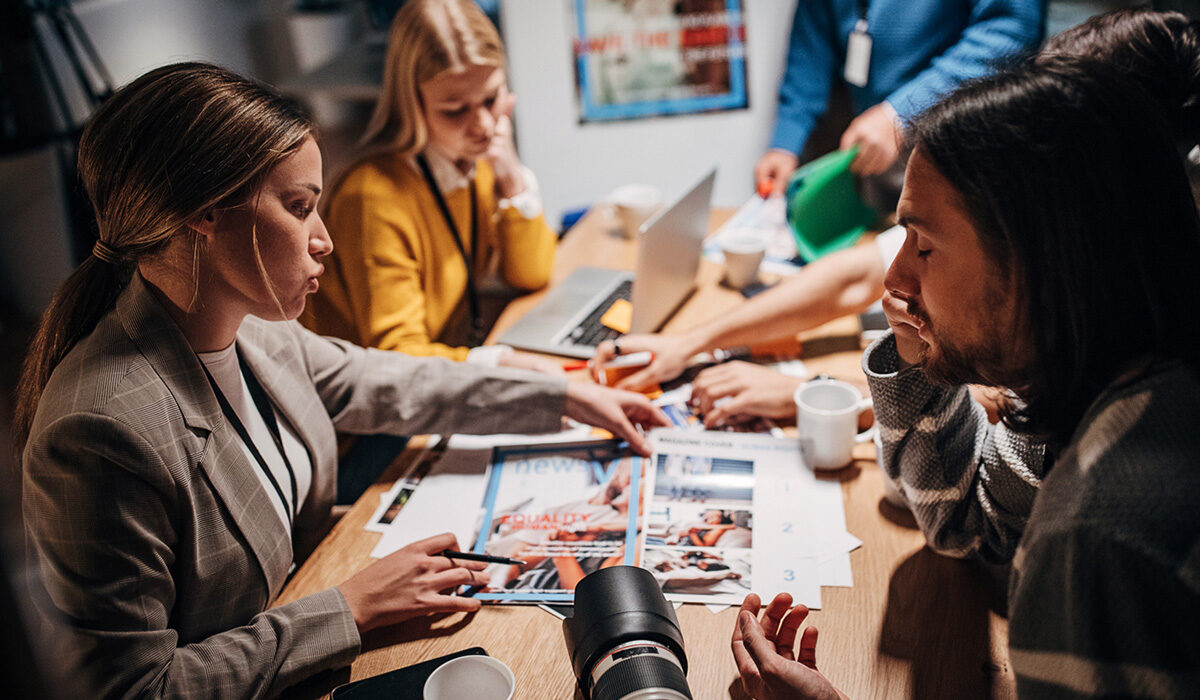 Gadsden County High School and Oviedo High School couldn’t be further apart, both geographically and statistically, but they do share one thing: bragging rights. These schools publish student newspapers (The Gadsden County Gazette and The Lion’s Tale, respectively) that have collected local and national journalism awards for the past several years, and both earned top honors this year in multiple categories. NEXT spoke with faculty advisors, staff writers, and student editors at the Gazette and the Mane, and we were blown away by their passion, talent, and drive. In fact, these students were so bright and articulate that we decided to just let them speak for themselves. Here are a few of their favorite pieces from this year.

I Don’t Wanna Be “The Mom” by Abigail McIntyre

Am I too mature for my peers? Whenever I converse with my friends, I always feel like I’m the odd one out.

Sometimes I can’t relate to topics. My friends have problems, but they seem so easy to get out of. Why like some boy if he doesn’t even pay attention to you? Why would you get into a relationship with someone who you don’t even like?

Am I too old for the drama that they gossip about? It feels like a waste of time to argue about pointless things.

Am I more responsible? Don’t get me wrong, I am still very much a teen. I stay up until 4 a.m. playing video games.

I’m responsible enough to wake myself up early, make my own breakfast, and get to school, even though I’d rather sleep in.

I believe my past experiences have formed the quiet, mature individual I am.

I’m a reliable source to my friends. If they miss a day, I’m always there to hand them the chemistry notes they missed.

If they need an extra dollar for something, I pitch in a dollar.

I might as well wash their dishes and do their laundry!

It just shows I love them.

And if I’m the mom, I’m a really awesome mom.

The Future of Journalism? We must stop this “fake news” by Amanni Skeete

For the past few years, it seems that journalism has taken a turn for the worse. This makes many people wonder what the future holds.

Will we continue to see a rapid decline in true journalism or will we take a stand and do better?

I honestly don’t know, but what I do know is that the future of journalism is in trouble.

If we look at how stories in the past were reported compared to now, we can all see how different things are.

Take Watergate, for example: Bob Woodward and Carl Bernstein stopped at nothing until they had all the facts and credible sources.

Now people don’t really care if news is true or not as long as it’s entertaining. I read a story about Pete Davidson having a hickey. Is this really where we are heading?

I sure hope not.

As a journalist, your job is to inform the public. This means telling people the things they need to know. News can be entertaining, but it also needs to be truthful and important.

Most teens get their information from social media, the most predominant platform for fake news, and they don’t pay enough attention to that.

I don’t think anyone should be proud of what journalism has looked like in the past few years. We have strayed away from the basic code of ethics. News is no longer really true or unbiased anymore.

Let’s Face it: On Rogan, Spotify was asleep at the mouse by Juanita Forehand

I love podcasts and I would love to start one myself one day. But, my disdain comes in when people use their highly coveted platforms to spread information without thinking about how it will affect their listeners. Joe Rogan has been a part of the problem. Rogan has invited people who have furthered distrust for vaccines, questioned when the government is trying to help us, and kept certain values from the Confederacy.

Is this entirely Rogan’s fault? Not exactly. We can only go as far as people let us. Rogan’s platform is being upheld by Spotify, which means that every time Rogan says something absurd, or has a guest that does, Spotify encourages the preposterous statements. Sure, they issued a statement that said that they would make their rules more clear, but if they are not going to take drastic action against people like Joe Rogan…what’s the use?

Now, this does not omit Rogan from any responsibility! As the host of the show, he should be the first to call out someone when they say something ludicrous.

Does Rogan do that? Nope. This is how we are further pushed into oblivion. When someone with as large a platform as Rogan uses it against the betterment of us all it stops our progression.

This is why artists like Neil Young are standing up now. Spotify gets its income from us streaming artists’ songs. So, if a big-name artist like Neil Young takes his music off the platform, then Spotify loses a great profit. It always starts with one person and evolves into something bigger than we could have imagined.

Cancel Culture: Is it possible to separate the art from the artist? By Emma Yost

favorable information about an artist is discovered, fans on social media claim to stop supporting the artist. However, more times than not, the artist still receives a similar amount of streams and support than before they were “canceled.”

Lana Del Rey, canceled twice (for wearing a Native headdress, and for glamorizing domestic abuse), has since released two chart-topping albums. Country singer Morgan Wallen was canceled after a video showing him using a racist slur surfaced; he sold out almost all of his 54 tour dates for 2022.

Similarly, numerous indie bands, such as LANY and BØRNS, have been canceled for taking advantage of their fans. Members of both bands were accused of sexual misconduct involving underaged girls.

The recurring argument seen online is that you must be able to separate the art from the artist. Enjoy the music as a piece of art, but don’t make it about the person who created it.

I think that this can be applied for some of these cases, but when it comes to sexual assault, it is quite difficult to listen to said artists’ music without thinking of how they took advantage of someone. When it comes to racism, it reveals that the person you are supporting is someone completely different than you thought, changing the meaning of the music.

I don’t think that any artist can truly be “canceled,” and simply not streaming their music will not solve this problem. Spotify and Apple Music only pay the artist about $0.003 – $0.005 per stream, according to Business Insider. They’re not really profiting from it.

Realistically, fans cannot force this person to change by not streaming their music. If morally, it feels wrong to do so, then by all means don’t support a problematic artist. But in the end, the artist herself is the only person who can reflect and work to become a better person.

Mental health care has been stigmatized for centuries. But within recent years, society has begun to embrace the previously forbidden concept.

This includes the discussion of it being brought into classrooms, though many students are against the current approach schools have taken.

“So much of [school mental health training] is outdated with stereotypical views,” said junior Grace DeCoursey, “and it’s almost hypocritical of the school to preach mental health while damaging the mental health of students at the same time.”

Further, individual teachers aren’t always qualified or trained to be attentive to all student matters.

“I think they should bring in real mental health counselors,” said junior Naman Doad. “I don’t think we should shy away from talking about the darker, more traumatic side of things just as much as we talk about the solutions to them.”

Students are also wary to open up about their trauma and internal battles because of state and local policies. The fear of being institutionalized [under Florida’s Baker Act] holds them back from speaking openly and receiving help.

According to America’s Health Rankings annual report, suicide has become the second leading cause of death among adolescents, making it vital to properly educate students while they’re still in that dangerous age range.

Now is a fragile time in any teenager’s life. They need real guidance from a professional mental health counselor that will genuinely reach and benefit them. It’s possible to achieve this, but not before adjusting the broken system.