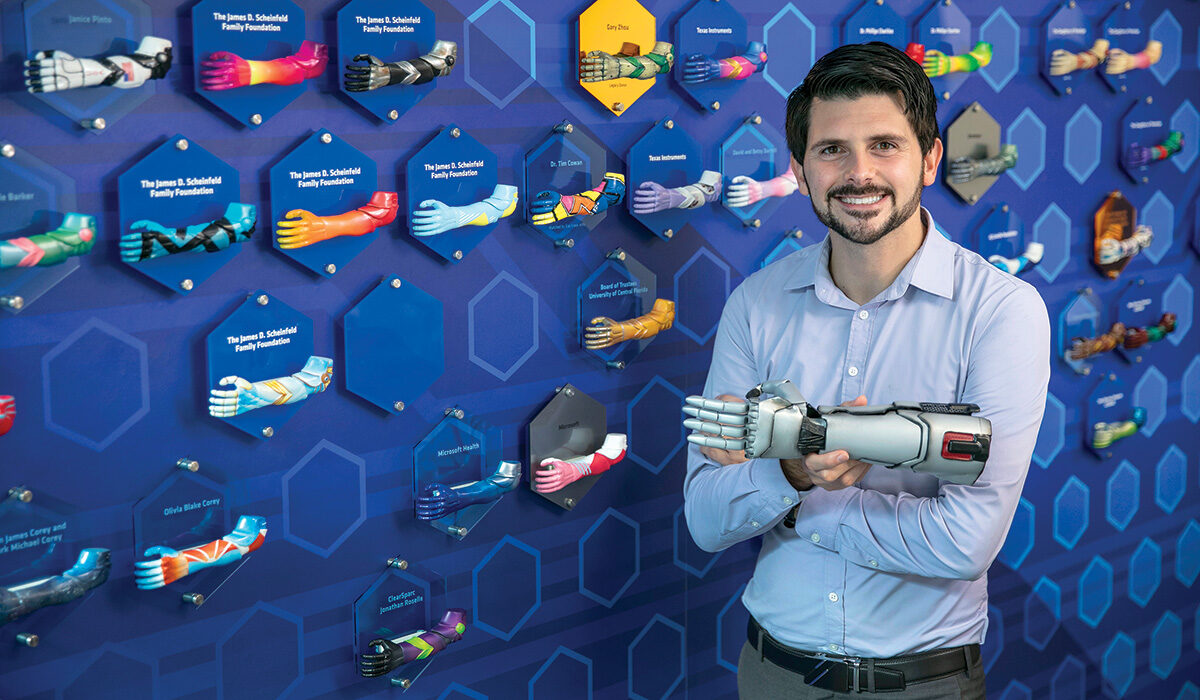 Stuck in trafﬁc, University of Central Florida engineering student Albert Manero was listening to a radio interview about a 3D printed mechanical hand. Manero was deeply involved in aerospace research, but “it so captured me — this idea that you could use design work to help children so directly.”

“That started the snowball that is now Limbitless and anchored here at UCF,” says now-CEO Manero, who co-founded the company with fellow engineers.

Limbitless’ bionic arms are built in modular sections so they can grow with the child. The arms are fun to wear, with interchangeable themes, and they come with video games to help kids learn how to use their new bionic arms.

By design, an interdisciplinary approach and collaborative spirit is baked into Limbitless’ DNA. Their hub near the UCF campus houses space for 3D printing, painting, and assembly. Recently, students from animation, game design, and computer science were collaborating on upcoming instructional video game projects with a professor. Meanwhile, a couple of health sciences students were working on preliminary research for an upcoming clinical trial, and an arts student was painting parts of a bionic arm, while a business student gave a tour.

“For interns, we look for a blend of empathy, design, and creativity, and being able to work on an interdisciplinary team and valuing the contributions and the perspectives of others,” Manero says. “We recruit engineers, video game designers, ﬁne and digital artists, business majors — really anyone we can ﬁnd to add to that voice.”

“I want to give back to people through my art,” says Peddinti, “and this is the most direct way I have ever seen.”

Limbitless has provided designs for the Assassin’s Creed franchise — and for Iron Man’s bionic arm. Manero says, “The Tony Stark character that came out when I was in high school was one of the reasons pushing me to be an aerospace engineer.”