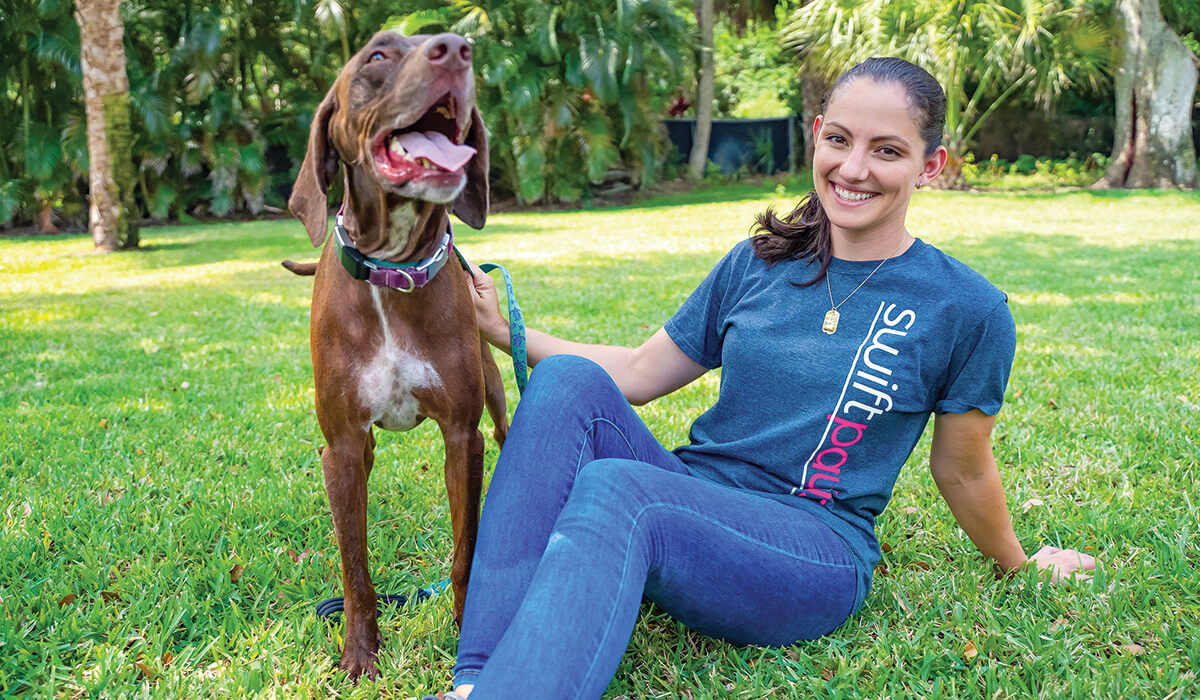 “It’s been such an education. I’ve learned more about myself, about business, about finance, about negotiation than I ever did throughout my education,” says Meghan Wolfgram, 32, Founder and CEO of SwiftPaws, Melbourne.

Brevard County native Meghan Wolfgram graduated from high school with an associate’s degree through a dual enrollment program and was been accepted into the University of Florida’s veterinary program. “I was going to go into large-animal equine sciences.”

Instead, the then 18-year-old opted to take a gap year and participate in an exchange program in Germany, interning at a horse farm, learning a new language — and opening her mind to explore other pathways. That took her to DePauw University in Indiana on a full scholarship to study economics. After graduating in 2011, she returned to the Melbourne area — she’d had enough of winter — intending to take the summer off and then look for a job, likely in investment banking.

“During that summer, I was competing in dog agility, having fun with my dog, Pretzel, my sidekick, and I’m doing what I love most in the world.” That’s when Wolfgram found out about lure-coursing, a sport for dogs that involves chasing a mechanically operated lure at high speeds. When she couldn’t find events near her or an affordable version of the machine, she and her father built one in their garage. “We went through a couple of failures, but we ended up building a rough, workable machine.”

To close out her summer of fun, she threw a dog party, inviting the owners of 60 dogs to try out her mechanical lure. “They all were like, ‘Wow, this is amazing. When are we doing this again?’ And I’m supposed to be getting a real job.”

Wolfgram’s “real job” would have to wait. In 2012, she and a business partner began hosting promotional events to get feedback and started manufacturing the mechanical lure machine.

Their customers included doggy day cares, law enforcement agencies to exercise their K-9s, and zoos. “Steve Irwin’s Australia Zoo has my machine. I’ve seen it on Animal Planet. The San Diego Zoo Safari Park uses it for their cheetahs.”

But as she traveled around the country, she kept hearing, “I wish I had this for my back yard” and kept a list of anyone who expressed interest. In the first few years, the company sold about 100 of the $2,000-plus machines but was not profitable. Wolfgram was funding it with her college savings and took on side gigs — working at vet clinic, giving horseback riding lessons, pet sitting — and she was determined to bring the fun to back yards. “When we came out with a consumer version was when we turned into a real startup,” she says.

In late 2017, SwiftPaws raised more than $73,000 in a Kickstarter crowdfunding campaign to create SwiftPaws Home. Sales started slowly for the $450 consumer version of the mechanical lure. Then in 2020, the company was able to raise about $670,000, increase production and grow its team. In the second half of 2020, SwiftPaws generated more than $400,000 in revenue, Wolfgram says.

With her second dog, Piper, in tow, Wolfgram flew to Los Angeles to pitch to the Sharks in September 2021. The pointer mix put on a show as she chased the mechanical lure during an episode that aired in season 13 on April 8, 2022.

“My segment was eight minutes long on TV, but I was in the tank pitching for over an hour. We talked about the whole history of the company.”

On the show, she accepted a deal from Lori Greiner, winning Greiner’s “golden ticket,” which Greiner awards at most once a season. With the golden ticket came a $240,000 investment in SwiftPaws in exchange for a 6% equity stake. Greiner is a SwiftPaws adviser. “I cried way more than they shared on TV,” Wolfgram says.

SwiftPaws more than doubled inventory in anticipation of a post-show sales spike and sold out in three weeks. The company is on track to hit $1.5 million in sales this year.

During the episode, the Sharks told Wolfgram what she already knew: The lure toy costs too much for the mass consumer market. The company of five employees plus contractors is revamping production to get a price point closer to $199 — that’s the goal for the end of 2023 — and adapt SwiftPaws for use in smaller spaces.

SwiftPaws is now a wellness and enrichment company with products for pets of all kinds. On the radar is a version of the flagship product for cats with a feather to chase.